On August 17 at the Indiana State Fair, Tim and Beth Sheets received the 2017 Arnold Award for Rural Preservation from Indiana Landmarks and Indiana Farm Bureau.

At Heritage Farm on County Road 400 North in Howard County, the Sheets family raises Suri Alpacas in a big red barn built in 1911. The builder used 10 x 10 hand-hewn timbers that were recycled from an even older dismantled barn.

Beth Sheets’ parents Bob and Nelda Lovelace bought the farm in the 1950s and used the English-style barn in raising Hereford cattle. The Sheets house up to 50 alpacas in the barn and store hay in the loft.

“Our alpacas benefit from the large wagon doors on the east and west sides of the barn. In summer, we open the doors to allow a cooling breeze to flow through the nave—the open center of the barn,” says Tim. In the old days, the hay forks on an overhead trolley system in the 16-foot wide nave unloaded wagons of harvested hay. “While the system remains intact, we use the space as a shearing ‘room’ in the spring when we harvest the alpacas’ fleece,” he adds.

The couple added a contemporary feature, based on an old tradition, when they replaced the barn roof in 2003. “We stayed away from many recommendations to cover it with metal roof and instead opted for asphalt shingles that allow the creation of a pictorial design. The diamond-shaped shingles depict an alpaca with twisted Suri locks. We have a one-of-a-kind roof on a barn that’s over 100 years old, and it’s an ad for our product,” he says.

The couple lives in the 150 year-old farmhouse that was lovingly restored by Beth’s parents. In 1987, the Lovelaces rescued a log cabin that was going to be demolished on a neighboring farm. They moved and restored it as a family project. Tim and Beth Sheets share the cabin with clubs, school and church groups and anyone who wants to experience a little bit of the past and enjoy the serenity of the farm. Last year, they renovated it to create a comfortable guesthouse, which they rent for overnight stays. “So far, we have had the privilege of sharing our farm with several families from big cities such as Chicago and Indianapolis,” notes Beth.

“Heritage Farm has had wonderful stewards who take great care of the property’s historic buildings. It’s a wonderfully picturesque place and fully functional,” said Tommy Kleckner, Indiana Landmarks’ western office director. Kleckner, who grew up on a farm in Iowa, manages the annual selection process to choose the winner of the Arnold Award for Rural Preservation.

The annual award is named in memory of John Arnold (1955-1991), a Rush County farmer committed to preserving Indiana’s rural heritage. 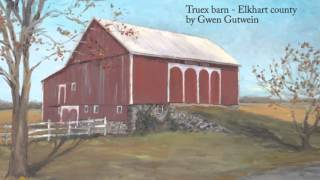